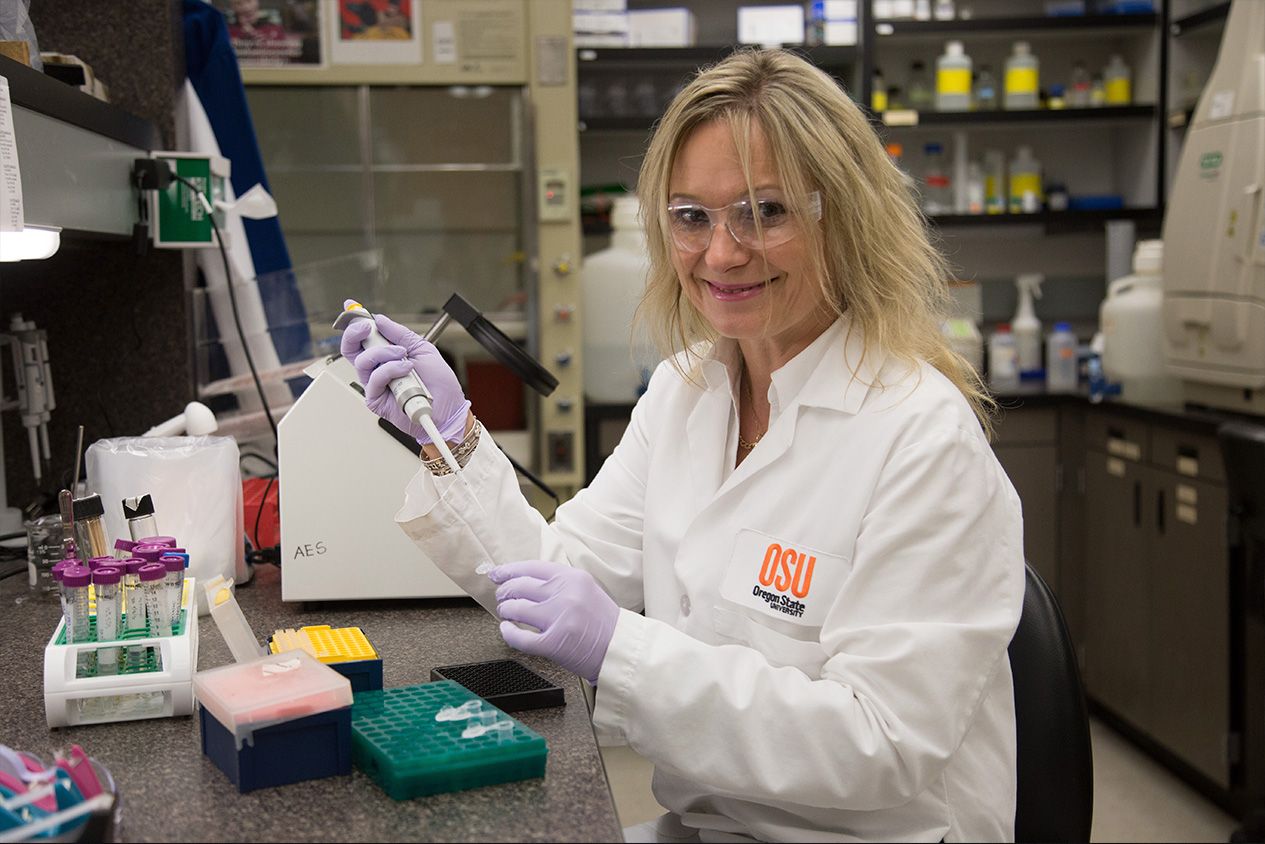 Neisseria gonorrhoeae is a dangerous bacteria — more dangerous than most people know. The good news is that Aleksandra Sikora, a professor in the Oregon State College of Pharmacy, and her colleague Konstantin Korotkov at the University of Kentucky, have found a novel way to help combat it.

The crux of their discovery is a peptide inhibitor that binds to a protein called AniA on the outer surface of a bacterium and makes it inactive. The bug needs this protein to grow in anaerobic conditions, which occur when the bacteria form biofilms — often associated with chronic and cervical infections. Such bacterial biofilms are difficult to treat, but with this peptide inhibitor, AniA function is disabled, and the bacteria are killed.

“This protein is a nonconventional target for antibiotics,” Sikora explains. “We found a completely new molecule that binds to this protein, disables its function and kills gonorrhea when it grows anaerobically.”

The treatment approach uses a highly specific mechanism of action to attack antibiotic-resistant strains of gonorrhea. And unlike many antibiotics, it spares beneficial bacteria in the body.

Sikora, Korotkov and their research team, which includes four Oregon State undergraduates, published their findings this year in the journal Antimicrobial Agents and Chemotherapy. Moving forward, Sikora wants to develop even more potent derivatives of the peptide that would increase its effectiveness. After additional testing and clinical trials, the goal will be to make it available on pharmacy shelves.

As a first step, Sikora worked with Oregon State University’s Advantage Impact team and Office for Commercialization and Corporate Development (OCCD) to file a patent application. OCCD is seeking a company to license and further develop the technology.

Worldwide, there are an estimated 78 million new cases of gonorrhea every year, 820,000 of them in the U.S. It is the second most commonly reported infectious disease in the nation. Many of these cases are untreatable as strains of the bacteria become increasingly resistant to traditional antibiotics — making Sikora’s breakthrough all the more important.

Additionally, infections disproportionately affect young people and females. Women who have contracted gonorrhea can experience severe health problems including ectopic pregnancies, pelvic inflammatory disease, infertility and passing infections to their newborns. Females are often asymptomatic compared to 99 percent of men, who know they have the disease and can seek treatment. Therefore, Sikora advocates for greater awareness efforts that encourage women and high school girls to be screened regularly.

She also recommends tenacity, knowing that it’s how big problems get solved. “Believe in what you want to do. If you think it’s a good idea, be persistent,” she says. “In science and in life, this is critically important.”

Oregon State University researchers like Aleksandra Sikora don’t back down from challenges. Fighting off a global superbug is exactly the type of problem they love to solve.

OSU is joining universities and academic health centers nationally in making licensing agreements for its intellectual property quickly executable for the development of technologies that can be used to diagnose, treat and prevent COVID-19.

Meet Digit: the two-legged robot that's going to be delivering your parcels in the future

Agility, the robotics company which was spun out of Oregon State University in 2015, has announced that its two-legged robot, Digit, is officially on sale.

NuScale Power, an Oregon-based energy startup, completed a prototype of its modular nuclear power reactor, which is super tiny at about 1/100th the size of a typical reactor.

From sustainable products to communication tools, Oregon State researchers are out there — improving quality of life for all.

Learn more about the latest innovations coming out of Oregon State University that are available for commercialization.

Your smartphone may be sharing data without your knowledge or permission. Oregon State found a way to stop it.