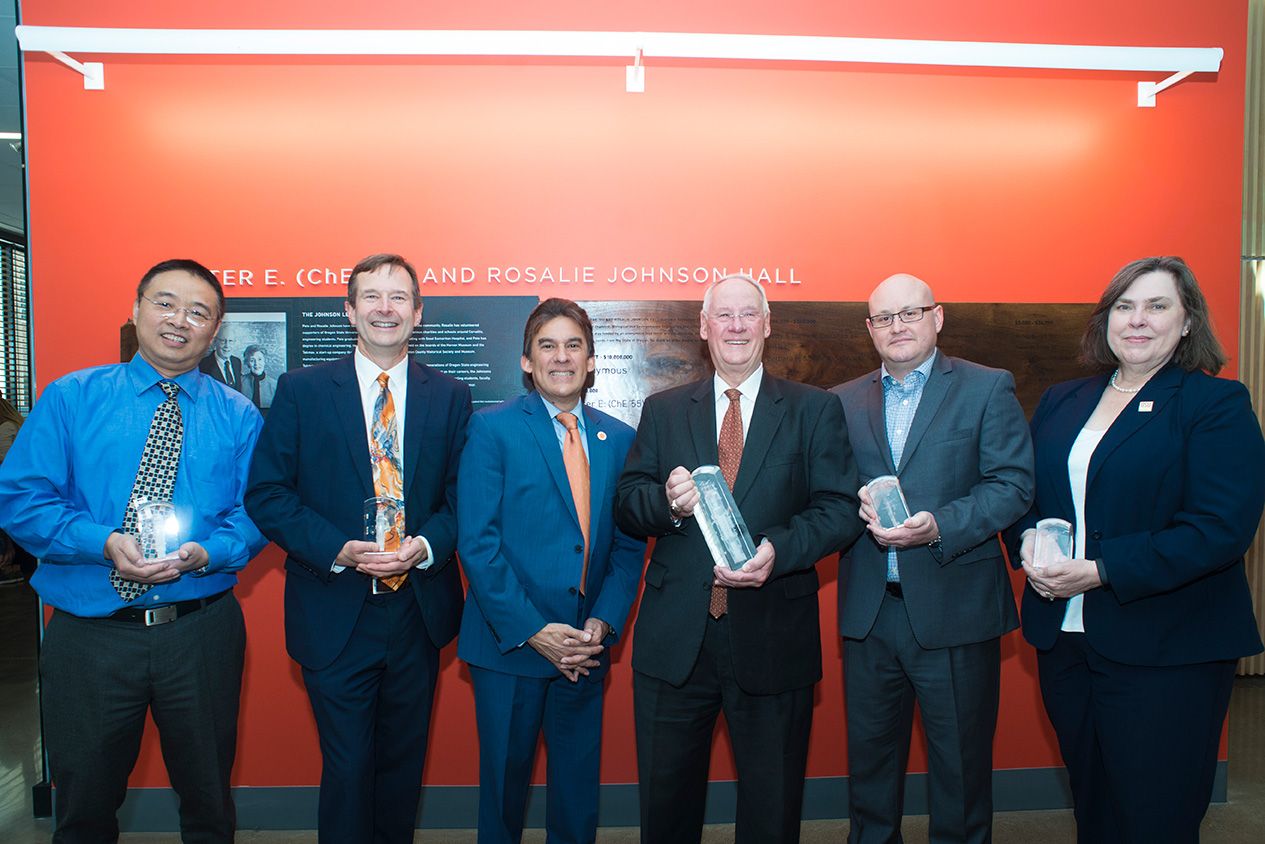 Over the last decade, Oregon State University and NuScale Power™ have worked together to tackle an important challenge: developing the next generation of nuclear reactors. Clean, reliable and economical nuclear power generation can replace coal power plants, reduce carbon emissions and meet rising demand for electricity in the U.S. and around the world.

In the early 2000s, scientists at Oregon State developed passive safety systems that use natural circulation to provide cooling for a nuclear reactor. Their design for a scalable, modular nuclear reactor led to the launch of NuScale Power, with Oregon State granting the spinoff company the exclusive license to commercialize the technology through what is now the Office for Commercialization and Corporate Development (OCCD). The university and NuScale have continued to use Oregon State's one-third-scale electrically-heated version of the reactor as a test facility.

The reactor — specifically known as a Multi-Application Small Light Water Reactor (MASLWR) — offers several advantages over conventional nuclear power that also make it cost competitive with other sources of baseload electricity generation. The NuScale reactor is far less complex, reducing the costs to fabricate, install, operate and maintain. Passive safety features allow the reactor to shut down automatically through gravity and convection, with no operator action, no AC or DC power and no external water required. These features are designed to ensure the plant can withstand incidents like the 2011 earthquake in Fukushima, Japan.

Jose Reyes pioneered the passive safety concept and led the Oregon State research team as head of the Department of Nuclear Engineering and Radiation Health Physics. He is the co-founder of NuScale Power and today serves as the company’s chief technology officer.

“It’s a genuine pleasure for me when I think back to where NuScale started with the early days of the MASLWR project,” Reyes says. “OSU helped connect me with a business mentor and first-round investors. And look how far we’ve come. We are $700 million into design development and commercialization with more than 360 patents pending or granted in 20 countries. Our design has been submitted for NRC certification, is getting international attention, and OSU continues to play a vital role in our testing programs. This has been an amazing 10-year collaboration.”

Since NuScale began, the company has established over 40 agreements with the university, ranging from research to testing to co-location and beyond. In celebration of this long-standing partnership, NuScale Power recently presented awards to President Ed Ray and other key partners at Oregon State.

The strength and longevity of this partnership show the powerful effect of bringing great minds together — better solutions are discovered, relationships are built, and new opportunities are created. That’s the Oregon State University Advantage.

Researchers at Oregon State University are working on ways to turn the waste from apples and other fruits into packaging materials to replace plastic.

Researchers at Oregon State University say they have developed a breakthrough that could make hydrogen energy more affordable. The research uses a catalyst to make green hydrogen production more affordable and accessible.

BP Energy Partners is looking to capitalize on increased efforts to curb methane emissions with a recent growth investment in Onboard Dynamics LLC. Onboard was born at Oregon State University with funding from the U.S. Energy Department.

Corvallis-based materials startup Inpria Corp., which is an OSU spinout, is being acquired by JSR Corp, one of the company’s strategic partners and investors.